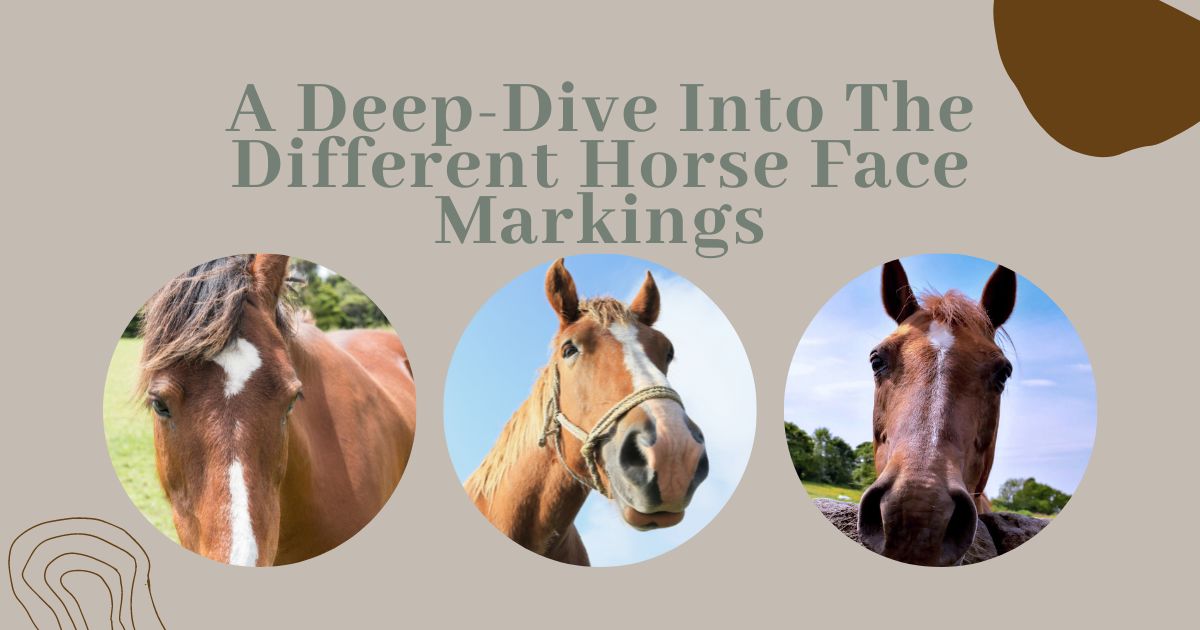 Many people don’t realize that there is a wide variety of unique horse face markings. To the untrained eye, all horses may look like they have a white blaze down the center of their face. However, there is much more to it than that!

For example, did you know that a horse’s blaze can be different shapes? It can be thin or thick, straight or crooked, long or short. It can even be doubled! And that’s just the beginning. There are many other horse head markings that we think you’ll find interesting.

Whether a bald face horse or a black horse with white markings, all horses are beautiful in their way. We’ll look closely at the horse face markings and what they mean.

What are Equine Face Markings?

Horses are beautiful creatures, and one of the things that make them so special is their unique facial markings. From white faces to blaze patterns, each horse is distinct in its way.

Equine facial markings are unique patterns and shapes on a horse’s head. Horse breeders use these markings to help identify individual horses. With so many different combinations of markings, it’s no wonder each horse has its one-of-a-kind look!

Many people are surprised to learn that there is such a wide variety of facial horse markings. Here are some of the most common facial markings that you might find on a horse:

A horse with a bald face has a broad white marking that extends from the forehead, down the nose, and to the cheekbones. This type of marking is common in pinto, Paint, and Clydesdale horses.

Most bald face horses have blue eyes and are prone to sunburn. Because of this, it’s essential to take extra care of them when they are out in the sun. Owners often apply sunscreen to their horse’s noses to prevent burning.

Some horse facial markings are a combination of two or more different markings. The most common varieties are:

Combination markings are an essential way for horse breeders to identify individual horses. During medical exams or when registering a horse for competitions, it’s best to have a clear photo or drawing of the horse’s facial markings. This will ensure proper identification of the horse.

These spots result from a horse’s genetic makeup and are not contagious. The horse’s coat color will not fade or change because of the ermine face spots. These spots can add to the horse’s beauty!

The snip is a V-shaped white patch found on the horse’s muzzle, between the horse’s nostrils. It may be a small patch or extend down the horse’s nose. Usually, you’ll find a snip connected to a horse’s blaze or stripe. However, a horse may have a snip without any other facial markings.

Snip is an irregular shape, and its size can vary. You may find a horse with a small snip or a horse with a large snip that extends down the horse’s nose.

While the name suggests otherwise, the shape of a horse’s star is not always that of a traditional five-point star. Instead, the horse’s star is a white marking on the forehead. The horse’s star may be small or large and have different shapes, such as an oval or diamond.

This facial marking is the most common of all horse facial markings. You’ll find horses with stars of all shapes and sizes. Some horses may have multiple stars on their forehead!

Horse star marking may appear faint, but they are usually pretty prominent. Most horses with stars also have other white markings on their face, such as a snip or strip.

The horse’s strip or stripe is a thin line of white running down the center of the horse’s face. It may be a continuous line, or it may be broken up into sections. This line typically starts at the horse’s muzzle and extends to the horse’s forehead.

Here is a handy summary chart of the most common horse face markings:

What Are the Markings on a Horse’s Face Called?

The markings on a horse’s face have many different names. Some of the most common include:

Why Do Horses Have White Markings on Face?

Horses with white faces are the result of a horse’s genetic makeup. These markings are not contagious and will not fade or change over time. Many people believe that these markings can add to the horse’s beauty!

How Do You Read a Horse’s Face?

When reading a horse’s face, you’ll want to look at the wrinkles, whiskers, and other facial features. These can all give you clues about the horse’s mood and health. For example, if a horse has a lot of wrinkles under its eyes, it may be experiencing physical or emotional stress.

What are the Markings on a Horse’s Nose Called?

A horse’s nose has two standard markings: the snip and the blaze. The snip is a small, V-shaped white marking between the horse’s nostrils. The blaze is a broad white stripe extending down the nose’s center.

Horse face markings can be a great way to add personality and character to your horse. Whether you’re looking for a white blaze or a star, there are many options. So, take your time and find the perfect facial marking for your horse!