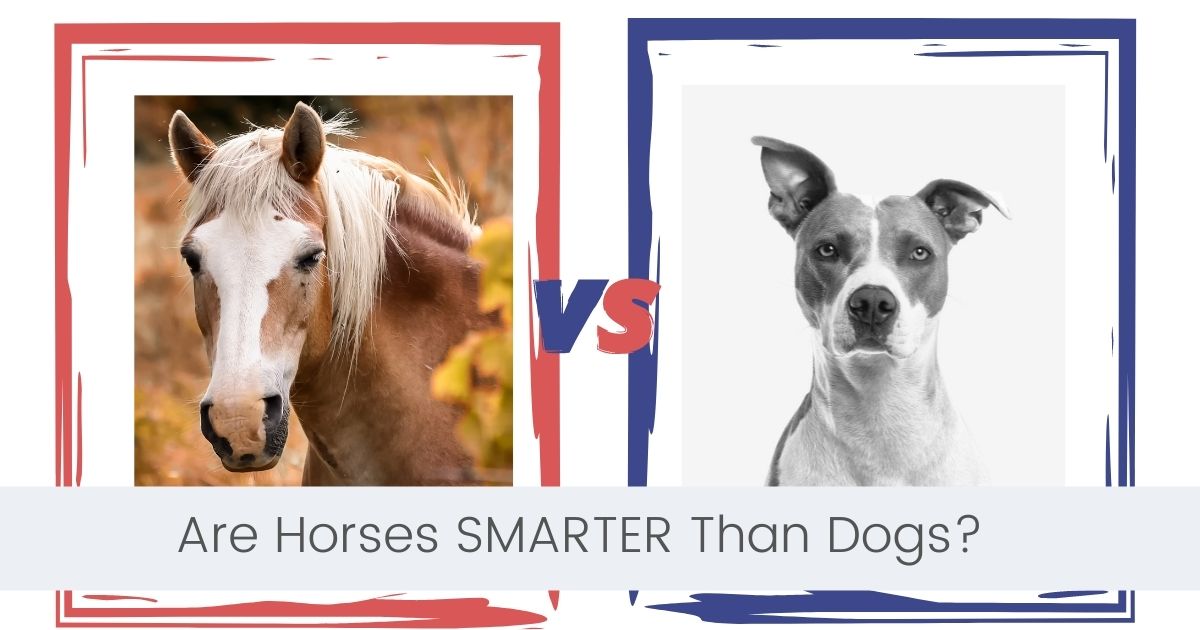 We all like to believe our specific pet is the smartest one out there. But, what if you own both a horse and a dog. Have you wondered are horses smarter than dogs, or are you quite sure your canine friend would take the top spot in a chess match?

Take a read below to learn more about intelligence in our furry friends – whether they were a saddle or a collar!

What Defines Intelligence in Horses vs. Dogs?

Usually, when we measure intelligence in humans, we use what is commonly known as an IQ test, which provides us with an intelligent quotient – a score, so to say. There are many different tests out there, but typical for them is that the test will present the test person with a task or question they need to respond to – often verbally.

As we cannot ask our horses or dogs any questions, how do we measure how intelligent they are? First of all, you need a test designed to objectively assess mental skills without raising the issue of anthropomorphism (interpreting nonhuman things or actions as human characteristics). Then you need to train them to respond to the test without influencing them.

However, when we attempt to compare intelligence across different species, it becomes almost undoable. It is nearly impossible to reliably compare the intelligence of animals of other species when there are uniform tasks or tests. Even with the animals we spend so much time with, like our horses and dogs.

As humans, we tend to consider intelligence in animals to be the ability to respond to commands correctly. This can vary from straightforward commands like “sit” or “trot” to more unspoken orders we barely realize we are giving. For example, when I close my computer, my dog stands – he knows there’s a walk coming. Is that intelligence or predictability on my part?

When my friend’s horse starts trotting when she sees the barn, is it because she is intelligent or because she knows the rhythm of the day – there’s food waiting for her. Defining what intelligence is in animals is another difficulty.

Also, when we discuss intelligence, we need to talk about different kinds of intelligence. Humans like to perceive intelligence as being academically “clever,” but there are other types to consider, including emotional intelligence.

So what is intelligence in horses and dogs? To fully understand that, we need to look into both species’ linguistic, logical, social, and emotional abilities independently!

But to summarize: Intelligence in animals is generally determined based on how they react to humans and our commands. Including:

How can we Compare Their Levels of Intelligence?

It is safe to say that both horses and dogs are intelligent animals – with individual varieties within both species, of course. But how can we compare whether horses are smarter than dogs?

Well, the harsh truth is that we really can’t. It’s not even like comparing oranges and apples. It’s a lot more like comparing a knife and a spoon. A spoon will seem pretty silly if you need to cut a steak, but a knife is pretty useless if you’re eating soup. Likewise, horses and dogs are biologically very different animals – one is prey, and one is a predator.

People who have never spent time with a horse may consider them stupid because they’re easily scared—not going to lie. It does seem pretty silly when a horse sees the same tree that has been standing there for the past decade and still jumps every time we go past – but I digress; being jumpy does not equal being stupid. It is simply because horses are prey animals.

Where most horses will need to run or defend themselves from predators, dogs are the predators. No, your Cocker Spaniel is probably unlikely to be able to take down a horse, but have you ever seen them shake a squeaky toy?

That’s your precious pet imagining themselves killing a helpless prey animal and the prey screaming. Nature is harsh.

Social and Emotional Intelligence in Horses

The ability to be highly emotionally intelligent is evident when you interact with horses – in fact, research suggests that horses recognize human emotions, almost as well as dogs! Considering that we domesticated dogs up to 40,000 years ago and horses “only” 6000 years ago, that’s impressive.

A research project even suggests that horses communicate with humans to help us. In the research study from 2016, horses were shown a carrot being hidden in a bucket they couldn’t access.

When a human was then let near the bucket, the horses attempted to communicate with the humans to get them to access the food. The horses were telling the humans where to look!

There is also anecdotal evidence of owners of horses being upset or scared and their horses comforting and defending them if necessary, showing an incredibly social and emotional intelligence.

There is, of course, evidence and anecdotes of dogs doing the same, but again, we need to factor in that dogs have historically been with humans for far longer than horses.

How Smart Are Horses?

Just like dogs, horses have been utilized all over the world for a very long time. As a result, they can learn complex tricks and commands and remember commands they learned a long time ago.

Horses can even associate a particular environment with a specific task without a verbal command. Just watch me longe a horse – it’s a good thing the horse knows what’s happening and what to do because my verbal and non-verbal clues are a mess!

As we mentioned, research even suggests that the “clever” horse can learn to signal and “talk” with humans to express their needs. Some horses in a study being able to communicate whether they wanted to wear a rug or not – depending on the heat around them, also showed that horses are pretty self-aware and able to express their needs.

It is difficult to determine how much intelligence and how much the horse predicts what will happen, but there’s no way to deny that horses are clever animals.

How Smart Are Dogs?

Just like horses, dogs have been employed by military, police, and service-dog organizations worldwide. Research suggests that intelligent dogs are not only capable of responding to a given command, they are also capable of complex feats of social intelligence and emotional sensitivity.

With the brightest dogs seemingly being able to learn hundreds of words, it is safe to assume that a traditionally “clever” dog is one capable of quickly and reliably learning a new command or word. But dogs are also emotionally intelligent with the ability to “read” people that surpass even human-like animals like chimpanzees!

Dogs are also masters at predicting what we humans want from them. Personally, I love doing agility (a dog sport where you need to guide your dog over jumps and other obstacles) with my dog, and I will swear any day that my dog reads my mind and reacts before I even get the chance to shout a command. Intelligent little creatures they are as well!

So, Are Horses Smarter Than Dogs-Our Verdict

The boring answer to this question is, unfortunately: We don’t know. There’s a quote that is often attributed to Einstein – although it most likely was never said by him – it goes like this: “Everybody is a genius. But, if you judge a fish by its ability to climb a tree, it will live its whole life believing that it is stupid.”

It’s a bit of a stretch to compare horses and dogs to fish and humans, but nonetheless, it is primarily true in this case. Horses and dogs are both intelligent creatures with an almost unprecedented ability to work with and communicate with humans.

It is lastly essential to remember that the intelligence of your dog and horse, or at least how intelligent the animal is perceived to be, also depends a lot on you. How good are you at communicating what you want from your pet?

If you are clear and consistent in your communication, your pet will often reward you with being attentive and far more intelligent than you ever expected. Even though they, of course, all have days where they seem to have the intelligence quotient of a wet newspaper – I know my obedience champion at home has those days at least!