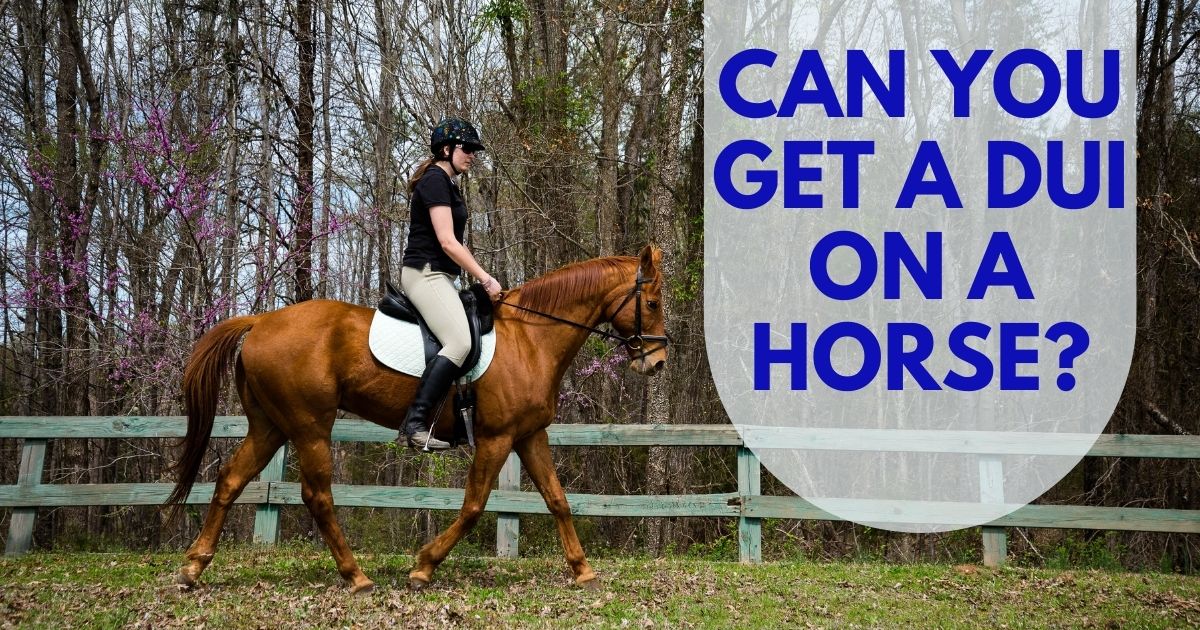 Can you Ride a Horse Drunk?

Can you get a DUI on a horse? In some states, you can face prosecution for DUI while riding a horse. Equestrian riding does not fall under these regulations.

Because DUI laws vary from state to state, double-check your state’s rules before deciding to drink and drive. Many trail riders like drinking alcohol but never consider obtaining a DUI.

Can You Get a DUI on a Horse?

Probably. Because the laws in each state are different, you will need to investigate whether or not the DUI statutes in your native state apply to horses. However, many police officers are not familiar with all laws. Unless they routinely observe drunk individuals riding horses, it is unlikely that they will know the relevant charge.

However, driving under the influence regulations in most states only apply to motor vehicles. This means they will either drop or modify the charges in court to something more relevant.

Can You Get a DUI On a Horse in Louisiana?

Most people living in Louisiana partake in a lot of drinking and horseback riding. Because you live in that state, it would be a good idea to share information on how the laws against driving under the influence of alcohol relate to drunk equestrian riding. A simple reading of Louisiana’s DUI laws makes it abundantly evident that the law does not cover horses.

Even while you might not be able to face charges with DUI for being drunk while riding your horse, this does not mean you are free and clear. The quick answer is no; however, before we go any further, let’s look at what the DUI laws in Louisiana deem drunk.

According to the laws of Louisiana, they consider a person legally drunk if they have a blood alcohol content (BAC) of 0.02 percent or above. The person should be under the age of 21, or if they are over the age of 21 and have a BAC of 0.08 percent.

RS 14:98 is where you’ll discover the statute governing driving under the influence in Louisiana. Statute A (1) states that operating a motor vehicle while under alcohol or drugs is illegal.

The law specifies that it is a crime to use a motor vehicle while under the influence of alcohol or drugs if you operate any motor vehicle, aircraft, watercraft, vessel, or other means of transportation.

Can You Get a DWI/DUI On a Horse in Texas?

While in Texas, you might see several people riding horses in town after having had too much to drink. The fact that these drunk people are riding horses makes you wonder whether or not the regulations about driving under the influence in Texas apply to horseback riders.

To face prosecution for driving while drunk under Texas law, an individual must have been operating a motor vehicle at the time of the incident. The scope of this concept extends to include automobiles, trucks, motorbikes, boats with motors, and aircraft. The Texas DWI legislation does not include any provisions about riding horses.

The legislators decided not to include language in their statutes criminalizing drunk riding of horses. Because law enforcement personnel aren’t familiar with drunk equestrian riding regulations, they might charge a rider with driving while intoxicated (DWI).

However, if they follow it, the charge will likely face dismissal or change to a lesser charge of animal endangerment.

Can You Get a DUI On a Horse in California?

The state of California is home to several different riding sanctuaries, and a specific set of rules governs each one. It would interest you to learn California’s stance on DUI charges related to horseback riding. North Carolina’s breathtaking mountains make for a fun and exciting spot to go trail riding.

But what is the state’s official stance regarding intoxicated horseback riding on public roads? It is illegal to ride your horse while under the influence of alcohol or drugs in the state of North Carolina. A court ruled that a horseback rider was guilty of driving while drunk. This is because he rode his horse on a public road while his blood-alcohol level was above the legal limit.

The case was State v. Dellinger. The citation for this court case is 73 N.C. App. 685,1985. The court determined that a person riding a horse on a public roadway was subject to the same laws as any other person operating a vehicle.

In addition, the court came to the conclusion that horses fulfilled the requirements of the definition of a vehicle. The legislative body has, for many years, made numerous unsuccessful attempts to exclude horses from the DWI statutes.

Can You Get a DUI on a Horse in Michigan?

You will find out that Michigan has such a significant horse population. You may be curious whether it is against the law in Michigan state to ride a horse while under the influence of alcohol.

Due to the necessity of operating a motor vehicle, the driving while intoxicated legislation in Michigan does not apply to horseback riding. Surprisingly, the state of Michigan considers a horse a form of transportation when defining the term “vehicle.”

However, to face conviction of a DUI in Michigan, you must have been operating a motor vehicle while under the influence of alcohol or drugs. It is possible to face charges for crimes other than driving under the influence if you are drunk while horseback riding on Michigan highways, such as public drunkenness or drunk and disorderly behavior.

Can You Get a DUI on a Horse in Colorado?

While driving through the mountain communities in the western part of Colorado, you will notice people riding horses on the roadway. Due to the high volume of riders, you can’t help but wonder if Colorado’s legislation makes it illegal to ride horses while under the influence of alcohol.

According to the statutes governing DUI in Colorado, it is a criminal offense for a person to operate a motor vehicle while under alcohol or drugs. This prohibition applies to both legal and illegal substances. Horses are not motor vehicles; that much is obvious.

Can You Get a DUI on a Horse in Kentucky?

The state of Kentucky is famous for its horses, bluegrass fields, and great bourbon. It is not surprising that the state is also known for horseback riding. How exactly do Kentucky’s DUI statutes address the issue of drunken horseback riding on public roads?

In Kentucky, it violates the DUI statutes to ride a horse on a public road while under alcohol or drugs. Drunk horseback riders are subject to prosecution and may receive a ticket.

The definition of driving under the influence in Kentucky is so broad that you may get a ticket for being drunk while sitting in practically anything, including a wheelchair. However, many think the courts have gone too far in their attempt to include horses in the definition of a vehicle.

In Kentucky, driving under the influence of alcohol while mounted on a horse can get you charged with DUI and convicted of the crime.

Can You Get a DUI on a Horse in Washington State?

Of course, you can face prosecutions for various felonies. This includes public intoxication or animal cruelty, and you would probably be. The charges will vary from case to case, depending on the situation’s specifics.

Can You Get a DUI on a Horse in Florida?

Riding a horse under the influence of alcohol or drugs is illegal on any public roadway in Florida. The state’s DUI statute considers a vehicle a “device.” Even though it is obvious that a horse does not qualify as a device, law enforcement officials continue to charge people with the offense of DUI.

This applies even when you are riding horses. In 2017, a woman who was 53 years old and appeared to be in confusion was riding her horse on a roadway. Someone walking by called the police, and when they arrived, they observed that she seemed lost. The officers conducted a test of the subject’s sobriety as well as their BAC (blood alcohol content).

The test results showed that the rider had double the amount of alcohol in her bloodstream, which resulted in her facing charges of driving under the influence and animal neglect. In addition to the crimes she was already facing, the state decided to charge her with disorderly drunkenness, endangering animals, and culpable negligence.

Since a horse is not considered a vehicle under Florida law, it is likely that it will withdraw the DUI charge. Is it possible that this was the reason the District Attorney levied additional fees?

Can You Get a DUI on a Horse in Tennessee?

The state of Tennessee is stunning, and it has a vibrant past that has roots in horses, music, and whiskey. If Tennessee has a statute prohibiting riding horses while under the influence of alcohol, mixing two of the three could generate legal issues. Horses are not an inclusion in Tennessee’s DUI statutes.

According to the law, the only way to acquire a DUI is if you drive a car. In Tennessee, a horse does not meet the requirements to qualify as a motor vehicle. There are additional statutes that can apply to charge an intoxicated horseback rider in Tennessee; some of these offenses have penalties that are just as severe as a DUI.

The applicable provision of the Tennessee Code Annotated is section 55-10-402, which makes it illegal for a person under the influence of alcohol or drugs to be in physical control of a vehicle operated by an internal combustion engine. People who are riding their lawn mowers have to comply with this statute.

The courts in Tennessee have determined that they consider any vehicle that is “self-propelled” motor-driven. See State v. Freels. This might have some ridiculous repercussions.

Can You Get a DUI on a Horse and Buggy?

Police can stop you anytime they suspect you of breaking the law. Suppose you are visually drunk, or the police believe you are drunk after hearing your responses to the questions. In that case, the officer may still ask you some questions and perhaps administer a sobriety test.

While most states will let you ride your horse home intoxicated because it isn’t a car, practically every state will let you get away with a DUI if you are dragging a carriage or buggy. Even if they don’t have a motor, they are road vehicles, and the driver cannot have a high blood alcohol level. If you are drunk, we advise leaving the horse and buggy where it is.

While most states would likely dismiss the DUI charge, you may still face significant fines. You’ll have to attend court appointments to get rid of the ticket. While riding a horse drunk is not as harmful to others as driving a car, it can be fatal to the rider. An intoxicated rider is more likely to fall off, get harmed, and collide with low-hanging branches that can knock them off.

You may also be more prone to risks, and unusual conduct can frighten a horse. Horseback riding is still a common mode of transportation in many parts of the United States. With the severity of the penalties for a DUI increasing, it’s no surprise that individuals seek other methods to go home from the pub.

If you live in an area with many horses, you might be wondering if you can face DUI charges while riding your horse home. In a nutshell, yes and no, but most likely not. It takes a little more explanation.