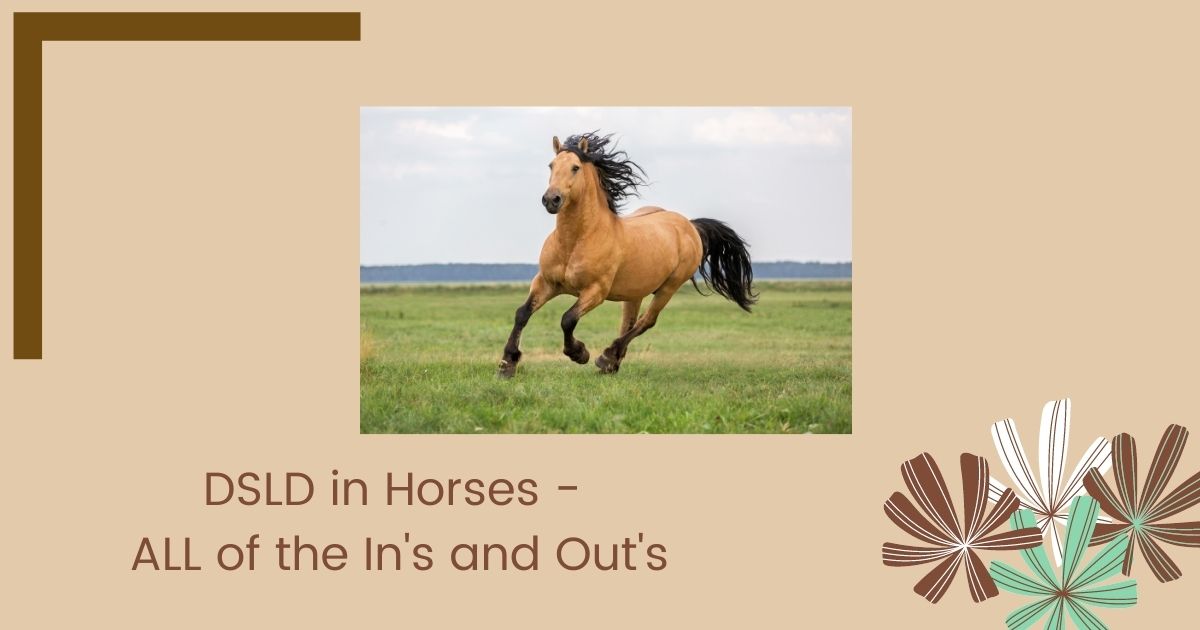 What is DSLD in Horses?

Degenerative Suspensory Ligament Disease (DSLD) in horses is a debilitating disorder. It causes chronic suspensory ligament breakdown, which causes the fetlocks to drop. This leads to persistent, incurable lameness in horses.

The suspensory ligament in horses primarily functions to support the fetlock joint. This stops it from hyperextending during motion. Instead, it runs from the carpal bones in the forelimbs and the hindlimbs’ tarsal bones to the fetlock. From there, it splits into two branches around the sesamoid bones.

Suspensory ligament injuries are common in athletic horses. This is because they place a lot of strain on their lower limbs. Geriatric horses can also experience a slow drop of the fetlock as the suspensory ligament stretches with age.

Degenerative Suspensory Ligament Disease is different from other suspensory ligament injuries. It is a systemic disease that affects all of the connective tissue in a horse. This includes the cardiovascular system, nuchal ligaments, and sclera of the eye. It is thought to be a heritable disease, with some breeds of horses more affected than others.

DSLD was first recognized in 1981 by Drs. Pryor, Pool, and Wheat at the University of California, Davis. A study group of 17 Peruvian Paso horses found that horses affected with DSLD did not have clinical signs consistent with suspensory ligament failure due to high-impact trauma.

A few years ago, a theory was put forth that horses with DSLD were laying down abnormal proteoglycans (a type of protein) in body tissues. The condition was renamed Equine Systemic Proteoglycan Accumulation (ESPA). This theory was disputed and is no longer widely accepted.

Clinical Signs and Symptoms of Horses with DSLD

DSLD onset is subtle in affected horses. These horses typically have no history of suspensory ligament injury. DSLD often affects more than one limb and can be seen in both forelimbs, hindlimbs, or all four limbs. Pain and lameness develop in multiple limbs over time.

Horses with DSLD typically present with the following clinical signs:

DSLD usually appears later in a horse’s life (over 15 years old) but has been diagnosed in foals and younger horses.

How is Degenerative Suspensory Ligament Disease in Equines Diagnosed

The criteria for diagnosing DSLD in horses was established in 2005. A typical diagnostic path should be followed for any horses with lameness. This includes a complete lameness examination and ultrasound of the lower limbs.

DSLD is unique in that it has a bilateral distribution. This means that both forelimbs, hindlimbs, or all four limbs are affected.

Horses with DSLD will be severely lame on affected limbs after the fetlock flexion test. These horses will also be very painful on palpation of the suspensory ligament and its branches. The suspensory ligament may feel harder and thicker than usual due to fibrosis. Lumpy areas may also be felt from calcification.

The suspensory ligaments may also palpate hot and swollen from inflammation and edema.

Observations and pedigree studies show that DSLD is more prevalent in certain bloodlines. This indicates that there may be a genetic predisposition. However, a genetic marker has not yet been identified.

Currently, there is no genetic test that can be done to indicate a horse’s possibility of developing the disease. Therefore, no estimate of heritability has been made in any horse breed.

DSLD may be a simple genetic disease or a complex disease with many genes contributing to the risk of illness. This is coupled with other factors such as diet and environment.

While some breeds, such as Peruvian Pasos, are predisposed, studies have not reported the prevalence in affected breeds. For example, some Peruvian horse herds have no cases of DSLD, but in other packs, the incidence of DSLD may reach ~40% of horses.

Clinical signs for DSLD do not usually appear until the horse is past its prime reproductive years. This means the horse may be passing the disease on unknowingly. Therefore, it is recommended that any affected horse not be bred.

The Comparative Genetics Research Laboratory at the University of Wisconsin-Madison is currently studying the genetics of DSLD in the Peruvian Horse.

There is currently no cure for DSLD. Treatments aim at ensuring that the horse is comfortable. Common treatments include controlled exercise, pain relief, supportive boots/wraps, and therapeutic trimming.

Mild to moderate exercise every other day can help to alleviate clinical signs. In addition, support wraps while exercising can help to prevent injuries.

Therapeutic trimming can be performed to provide support to the affected limbs. The toe is trimmed short enough to allow an easy breakover for the horse. The foot should be balanced from side to side and front to back.

Wedging the heel up and applying bar shoes can support the limb and relieve tension from the suspensory ligament. A high wedge should be used in severe cases and gradually brought down over time to use a regular wedge pad. This method can provide immediate relief in painful horses.

Methylsulfonylmethane (MSM) supplementation can be helpful to horses with DSLD. In addition, MSM has been reported to help restore flexibility to tissues.

Is There an Exact Cause to Dropped Fetlock in Horses?

Horses without DSLD produce cells that lay down collagen fibers to repair the trauma. In horses with DSLD, these cells do not lay down collagen. Instead, they convert to a cell type that produces cartilage. Cartilage within the ligament does not allow it to stretch and extend normally. This then leads to the breakdown of the ligament.

Certain bloodlines are predisposed to DSLD. The condition has been diagnosed in multiple breeds such as:

DSLD is most prevalent in Peruvian Pasos.

DSLD is not life-threatening; however, there is no cure. While the diagnosis is simple, management can be very difficult. Treatment focuses on keeping the horse comfortable with pain relief and corrective shoeing. This helps to alleviate the pressure on the suspensory ligaments.

Many horses are humanely euthanized as the condition progresses.

Prognosis and Outcomes of DSLD

DSLD is a progressive disease. As the suspensory ligament degenerates, the flexor tendons assume more concussive force. This can cause injury to both of these structures.

The fetlock, hock, and stifle become increasingly hyperextended as the disease progresses. The hyperextended fetlock joints can then become subluxated. Hyperextension of the joints also places abnormal stress on the joint cartilage.

This eventually leads to osteoarthritis of the joints. There is no cure for DSLD. In many horses, the disease worsens over time. Humane euthanasia may be indicated in severely affected horses.