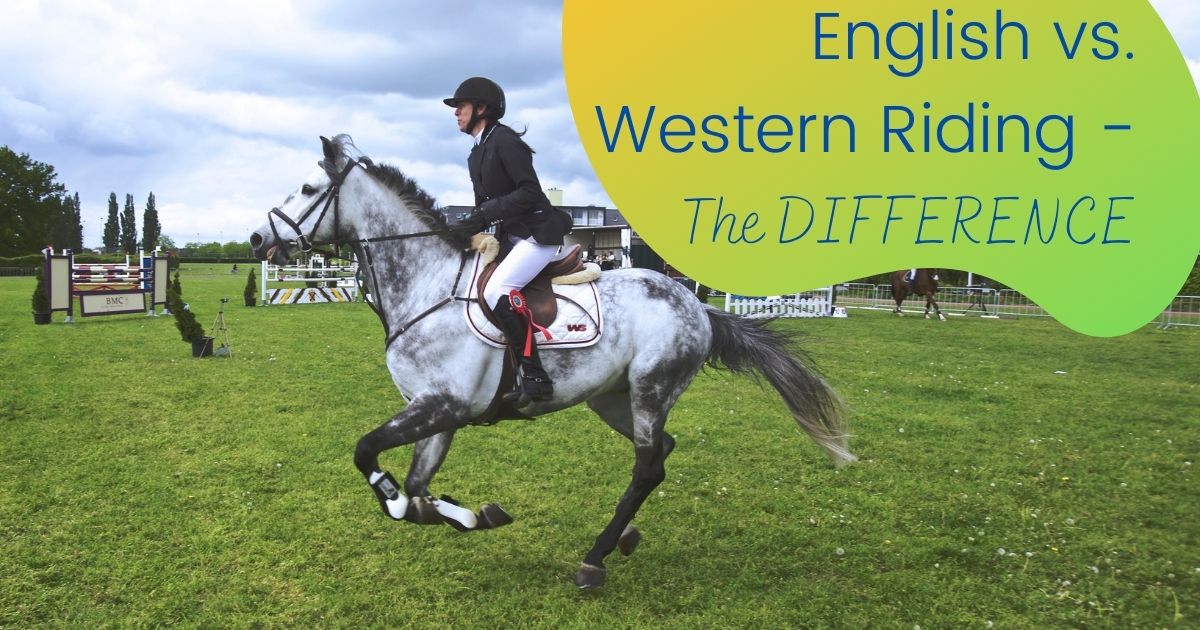 If you are a beginner horse rider, knowing the difference between the two riding styles spices up your horse riding experience. So, let us explore what you need to know about the said riding styles.

The Different Types of Horseback Riding

Horseback riding styles are either English or Western. However, there are some styles that you can find in both categories. The following are popular riding styles:

What is English Riding?

English riding is a type of horse riding that employs a flat English saddle. It has several variations. It seeks to give horses the flexibility to perform any given task optimally. This horse riding type also uses unique horse bridles, rider’s attire, and an English horse.

A rider has to hold the reins of a horse with two hands when English riding. Often, a rider has to rise and sit with every trot of their horse during this type of riding. However, they can opt to do a sitting trot when the rules of an event allow.

What is Western Riding?

Western riding style evolved from the Spanish welfare and ranching traditions. Riders had to control their horse using one hand and harness cattle using their other hand. To control the horse, the cowboys used a procedure called neck-rein. The method applied light pressure on the neck of the horse.

During western riding, horses have the freedom to use their instincts. For example, the horses can follow cows until their riders change the direction of the horses using the reins. So, the saddle that the riders use does little to control the movement of a horse.

English vs. Western Riding – the Difference?

The contact between the horse and its rider is one of the main differences between English and Western horse riding. Regarding the English style, a rider has direct contact with their horse. The rider uses their legs, the horse’s mouth reins, and the seat to control the direction and speed of their horse.

During a Western ride, the rider has little or no contact with the horse. Instead, the riders, weight, seat, and neck reins control the horse.

There is no difference between the rider’s sitting positions in the two types of horse riding. In both cases, a rider has to sit straight and tall. They should never lean forward or backward. Also, their legs should hand freely against the sides of their horse. Their hands should relax on their sides without flapping elbows.

The Western and English horses have similarities and differences in their gaits. An English horse uses a long and flowing motion. However, its speed, collection, and cadence make its activity varied. On the other hand, a Western horse has a low, smooth, and consistent motion.

When walking, the two types of hoses use a similar manner. Regarding jogging, a rider does not post the horse’s jog during Western horse riding. However, they can post faster trots or ride at a two-point position. On the other hand, an English rider has to post every trot unless the rules allow them to sit. Posting is rising from a saddle seat to counter a trot.

The next difference in gait is the lope or canter. Western riding employs a slow and relaxed lope. On the other hand, the English riding features an extended, elevated, and collected lope. Also, the English riding lope has several variations in line with the specific riding style of the rider.

Western Saddles vs. English Saddles – is There a Difference?

The Western cowboys spent much of their time mounted on their horses. Their horse saddle had to distribute their weight evenly on the back of their horse. The strategy provided the counterbalance that the cowboys required when roping cattle. The cowboys also wanted a comfortable saddle because of the rugged terrain and long hours of riding.

The Western saddle has a horn to anchor the lasso. It also has strings to tie various equipment that cowboys want while on the move. Currently, the Western saddle features several designs to support speed games, roping, equitation, and other events.

The several accessories to a Western saddle make it heavy and large. It also has a deep seat to support the rider’s upright position.

English riding evolved from mounted European military styles. So, the saddle is smaller and lighter than the Western saddle. Also, it seeks to give freedom to a horse and provide seat security to a rider.

The English saddle is also associated with eighteenth-century fox hunting sprees. During that time, this saddle did not slow a horse down. Also, the saddle was accommodative to the jumping of a horse over obstacles. So, the saddle made the horse and its rider the same in terms of their motion.

What is a Western Horse?

Western horses are compact. They have the potential to travel steadily all day long and occasionally chase the cattle.

What is an English Horse?

English horses are tall and sometimes leggy. Their features help them travel long distances at varying speeds. The features also enable these horses to jump obstacles.

Between English and Western Riding, Which is Easier?

Often, horse riding beginners find the Western saddle more comfortable and secure than the English one. However, the latter saddle requires more balance and coordination of the rider’s legs and reins than the earlier saddle.

However, both riding styles require a lot of practice to master. Therefore, your overall riding objective determines the kind you will pick. For example, if you love trail riding, go for Western riding. Otherwise, horse jumping enthusiasts should opt for the English riding style. Regardless of the type you choose, a competent instructor should be able to take you through it.

Regardless of the riding style, you have to train well to master it. Getting a professional horse riding instructor is always every rider’s starting point. After getting the drift, practice the following tips, among others, to maintain safety at all times: