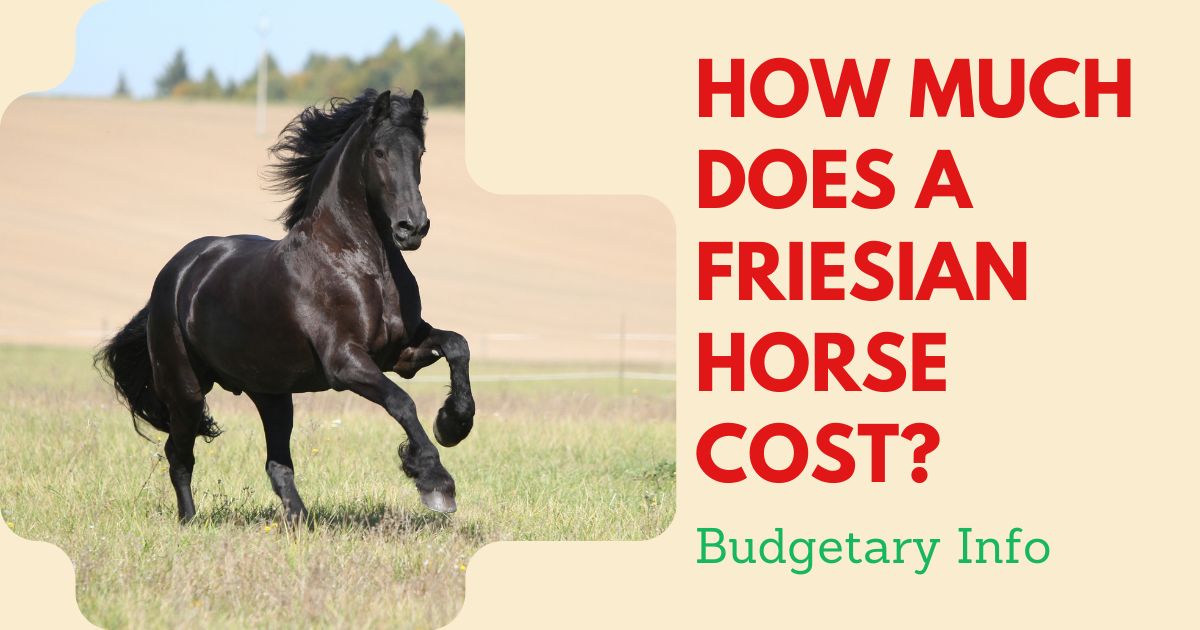 The Most Expensive Horse Breed to Own

How much does a Friesian horse cost? Horse prices differ due to their various physical characteristics, including health. Friesian horses are not as expensive as thoroughbreds since this breed is the most costly to own. Despite the Friesan not being the most expensive, this breed has its fan facts and uniqueness.

How Much Does a Friesian Horse Cost?

Friesian horse cost ranges from $19,900 to $47,900. On other occasions, this price may increase, especially if the Friesian horse is FHANA certified. Despite some Friesian horses being younger than others, their price never reduces. In most cases, the prices of these horse breeds maintain an optimum point on a graph.

Several factors may determine the Friesian horse cost. Below are the main factors to look out for:

Special Friesian horses with the studbook designation may cost more than the normal ones.

The brief body variation has short little legs, unlike the sport one, which has longer legs with stronger bones. The sport variation horses are also taller due to being more athletic. Despite these athletic features, the Friesian horse for sports is mostly for leisure riding.

Many Friesian horse breeders have started bringing out a new Friesian breed known as the modern Friesian. This new breed is lighter and faster than the previous variations. This variation also makes them expensive horse breeds due to the significant improvement in features and performance.

This variation’s price is also high because most participate in substantial racing competitions, making them super popular.

In most cases, potential buyers usually look for the best colors when searching for a horse. Because of this reason, colors may also influence the price of a horse. Purebred Friesian horses have a range of several colors. Some Friesian horses may be purely black, while others may have patches on their heads, creating a blend.

A few heritage horses of the Friesian breed have poses of chestnut, red, and other coat colors. The rare, unique Friesian coat colors give them a common name, fire Friesians.

Some of the fire Friesian horses have a little hybrid percentage. This little mixed percentage disqualifies these horses from the official breed studbook. Because of this reason, fried Friesians tend to be cheaper.

This factor also plays a massive role in determining the most expensive horse breed.

Stallions are more costly than geldings and mares in most cases because they play a vast and unique position in the breeding process.

Despite gender, horses that meet FPS standards usually cost more than the others that don’t meet. When it comes to the FPS standards, the height of a Friesian should be 5 feet (1.6 meters) by the time it reaches its first birthday.

A mare should be around 4 feet (1.5 meters). The ideal size for the breed is 15.25 to 16 hands (1.54 to 1.6 meters). The Friesian horse cost of these breeds is higher than the other variations that are shorter or taller.

An old horse costs less than a younger horse. This age factor cuts the same way across the Friesian breed. Old Friesian horses may be prone to diseases such as aortic artery rupture or other genetic conditions that may be deadly.

If a Friesian horse’s price is lower than usual, you must confirm the age. The low price of a Friesian horse should not trick you into buying an old, sick horse that may lead to losses in the end.

The Origin of the Friesian Horse

The Friesian horse originates from the Netherlands around 150 AD. The initial use of this horse was to help soldiers move around during war and on other occasions. Friesian horses were the foundation of old English black, the ancestor of the felly pony and the shire horse.

By the 18th and 19th centuries in the Friesland province, a restriction on Friesian horses came because the horse was mainly for pleasure purposes, primarily in trotting races. The Friesian horse became so famous after this restriction since it started getting used in breeding the American trotting horse and the Russian Orlov.

By 1913 the Friesian horses had to get back into the farm and compete with the Bovenlanders since there was no other choice. By such a time, luxury was not affordable, and the heavy farm works led to Friesian horses of heavier and smaller sizes.

Around the 1960s, French horses had a worse crisis than in 1913. There was the abolition of all horses working on farms since mechanization came. This case brought back Friesian horses for leisure activities, which have lasted for many years.

In terms of natural appearance and nature, the Friesian horse is a beautiful, noble breed and has been this way for several centuries.  You may recognize this breed because of its jet black and long thick mane and tail. The Friesian horse breed is well known for its athleticism, intelligence, and grace.

Despite having quite a fierce appearance, the Friesian horse also proves to have many other traits. These horses are very docile and gentle, making them the best option for activities such as trail riding. Being gentle, these horses are super easy to train, making them grasp a lot in just a short time.

To this date, Friesian horses are still revered for their natural beauty and grace. These reasons make them the best option for choosing ceremonial carriage horses due to their beauty and versatility. The dramatic appearance of these horses makes them suitable for ceremonies and scenarios such as television shows and other live entertainment events.

The Two Types of Friesian Horses

There are two main types of Friesian horses to this date. One of them is the sports horse which is relatively modern and athletic. The other Friesian horse type is the baroque, which has a more robust build since it is pretty classical.

What is a Friesian horse lifespan?

The average lifespan of a Friesian horse is usually 16 years. Other horses may live up to 25 or 30, depending on several living factors and conditions.

How tall is a Friesian horse?

How much do Friesian horses weigh?

On average, many Friesian horses weigh about 1200 to 1400 pounds (544 to 635 kilograms). Different feeding patterns may also affect this weight.

What is a Friesian horse’s diet?

Friesian horses do not need a diet that is heavy or complicated. These horses are mostly satisfied with a simple but quality diet of fruits, grain, and vegetables.

Friesian horse cost varies due to several factors, but this breed is fun and easy to maintain. With just superficial knowledge and several tips from this article, you may be sure to enjoy the company of your Friesian horse for as long as it’s alive.