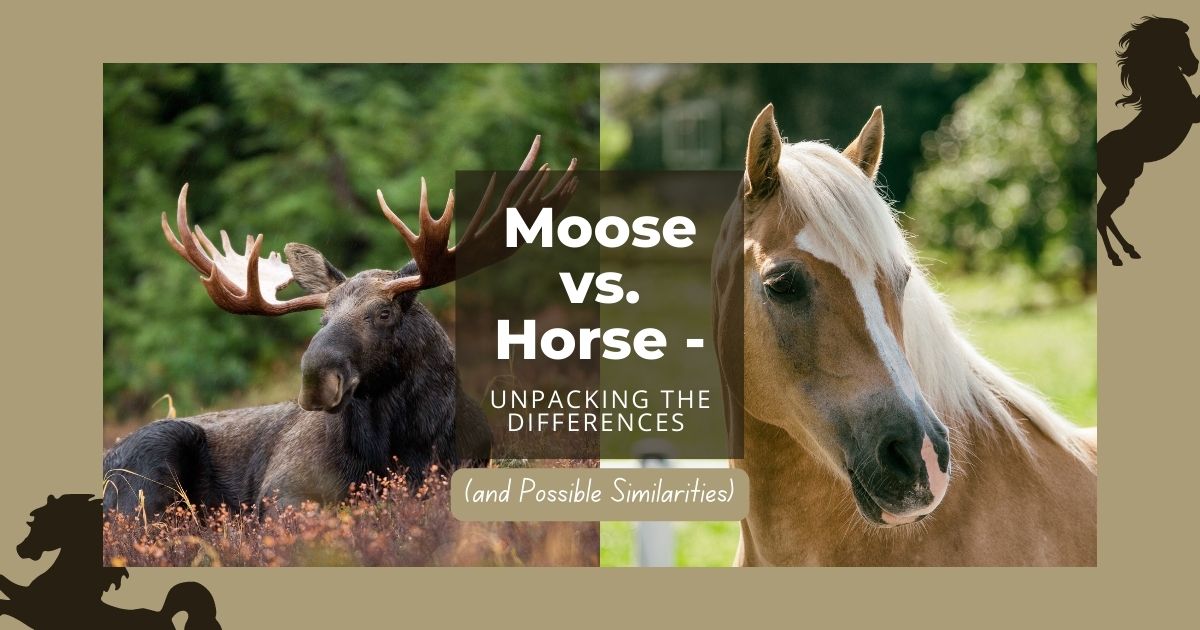 Can You Ride A Moose?

Have you thought of a comparison between a moose vs. a horse? No matter how desperately you think or wish they could, you cannot ride a moose. No one has ever been successful in training to ride a moose since they are wild and dangerous.

People have occasionally been able to mount a moose, but this is highly unusual and would never happen with a fully wild moose. With proper training, you can ride most horses.

Moose vs. Horse – a Size Comparison

They have a distinctive appearance and grow rather tall. If we are to compare these two creatures, it is crucial to understand their various characteristics. The typical moose stands taller and weighs more than the typical horse. The tallest and largest horses, which are quite uncommon, can be close in some ways.

Horses that are comparable to a moose in size are quite uncommon. Overall, moose are often heavier and larger than horses. This table below takes you through a detailed comparison between a moose size vs. a horse.

Horses are quite a little quicker than moose, according to some estimates. Moose is capable of reaching top speeds of up to 35 miles (56.34 kilometers) per hour when running, and obstacles such as snow or mud slow them down significantly.

Antlers are a characteristic that is unique to moose, as horses do not have them. A moose uses its antlers for various purposes, including bragging about its power and social standing and competing with other moose for a place in their social group.

They will utilize these antlers to compete with other moose and demonstrate their superiority over them, resolving conflicts without resorting to more lethal means. In the same way that horses do, moose will use their body weight and their legs in an attempt to kill or gravely damage another animal.

Horses are the only animals that have undergone domestication, as moose have not. Through careful care from the time they were infants until adulthood, it was once possible to domesticate certain moose. People have successfully been able to ride moose and use them in humans’ presence.

On the other hand, you cannot tame wild moose, and it seems unlikely that they ever will be. Attempting to approach or ride a moose in its natural environment is a definite way to end up seriously injured or dead. Moose are notoriously dangerous animals. However, horses are tameable and made suitable for domestic use.

In today’s world, they work on farms, are employed for transportation, and even serve as a source of entertainment. They were for various purposes, including delivery and even as weapons of war.

Moose coats are shades of brown and black, blended and distributed throughout the coat. As a result, they are only available in two colors, and the color scheme offers little room for creativity. You can find horses in various colors, including black, white, and gold; however, except for select breeds, such as the Appaloosa, most horses only have one dominant color.

Horses have one whole hoof on each foot, whereas moose have cloven hooves, which means they have two toes on each foot. Cloven hooves provide additional advantages for moose, including an increase in the amount of surface area contact they have with the ground under them.

Because of this, they have improved traction in the icy and mucky environments they inhabit. The one hoof that horses have enables them to generate great force with their legs while simultaneously reducing the impact they sustain when running.

The undercoat is dense and insulates the body so the animal does not lose as much heat as it would otherwise in cold conditions. Horses have only one layer of fur, which grows longer and denser during the colder months and falls off during the summer months. They do not live in consistently cold and rainy climates; thus, their fur does not need to be double-layered.

Both moose and horses are different from one another in many ways. Although horses are the more agile of the two, moose have the advantage in size, weight, and strength. When looking only at their external appearance, these two species of mammal are quite easy to differentiate from one another.

Because of the moose’s antlers, its dewlap, its coloring, and its general size, there is a good probability that you won’t be able to confuse any of these creatures with the other.

However, when you consider less obvious characteristics throughout the analysis, like fur, hooves, and domestication, the distinctions between these two types of mammals become clearer and less difficult to miss.

Their untamed, nomadic lifestyle likely contributes significantly to their relatively short life for such a huge animal as they are. In the wild, moose have a high mortality rate due to human hunters, automobiles, and other human involvement.

Because of the frequency with which grizzly bears haunt them, black bears, and wolves, the presence of predators is another potential cause of their demise. Domestic horses can live significantly longer than moose, and their lifespans often range from 25 to 30 years. There are records of horses living well into their thirties, although most of these horses were domestic.

The average lifespan of a wild horse is closer to that of a moose than it is to that of any other horse. This is due, in part, to natural elements as well as predators such as wolves and bears in the area.

Why Do Male Horses Not Have Antlers?

Because it is not a part of their genetic heritage and no horses in the equine family have ever had antlers, horses do not have them. Numerous people have spent years attempting to understand why male horses lack horns, in contrast to some of their Equidae family brethren.

Strangely, there have been multiple accounts of horses growing horns throughout history. While this may seem impossible, is it possible? Because they have evolved and survived without them, horses do not have horns. The key to its success is the horse’s ability to avoid predators with a keen awareness of its surroundings and a remarkable, quick-moving physique.

Horses don’t require horns with these advantages on their side! If you don’t know the difference, many horse breeds’ forehead protrusions could easily be mistaken for horns! Horses lack horns; some breeds have little bony growths on the front of their skulls. Because they relate to the deer and depend on them for survival, male moose are born with antlers.

Moose utilize their antlers to fend off rival males and entice potential mates. As a defense against predators, they will also use their antlers. Because it is not a part of their genetic heritage and no horses in the equine family have ever possessed antlers, horses do not possess them.

Horse vs. Moose – Who Will Win the Fight?

In a fight between a horse and a female moose, the odds of each animal winning are approximately equal; however, a male moose with complete antlers would almost certainly prevail.

A moose with antlers would have a significant offensive and defensive edge over a horse, even though a fight between a horse and a moose would be exceedingly unlikely to occur if the two animals were of comparable age and size. The presence of antlers was not an issue. Both animals would have an equal chance of winning.

Are Moose Dangerous Around Horses?

Have you ever wondered what may happen with a full-grown moose next to a horse? Moose are not typically hostile animals; nonetheless, they tend to turn hostile when humans, dogs, or traffic harass them or when they are hungry and fatigued, particularly during the winter when they have to trek through deep snow.

Is it risky to be with horses when there are moose around? Even while moose often do not pose a threat when they are near horses, it is nevertheless best practice to keep domesticated horses at a safe distance from wild moose.

This does not mean that horse owners should try to frighten moose away from their animals. Still, they should remain vigilant anytime moose are near their horses. If it becomes aggressive, a moose has the potential to inflict significant damage on a horse.

Both in terms of size and appearance, as well as the behaviors they engage in, horses and moose are very different from one another. Both of these creatures share some characteristics in common with one another. For instance, both are excellent fighters and herbivores, so they have a lot in common.

However, moose are relatively independent and do not travel in herds like horses. They associate with one another during the time of year when they are mating. Still, other than that, they are solitary animals. To summarize, moose and horses are both enormous, mysterious creatures that contribute beauty and balance to the world’s ecosystem.