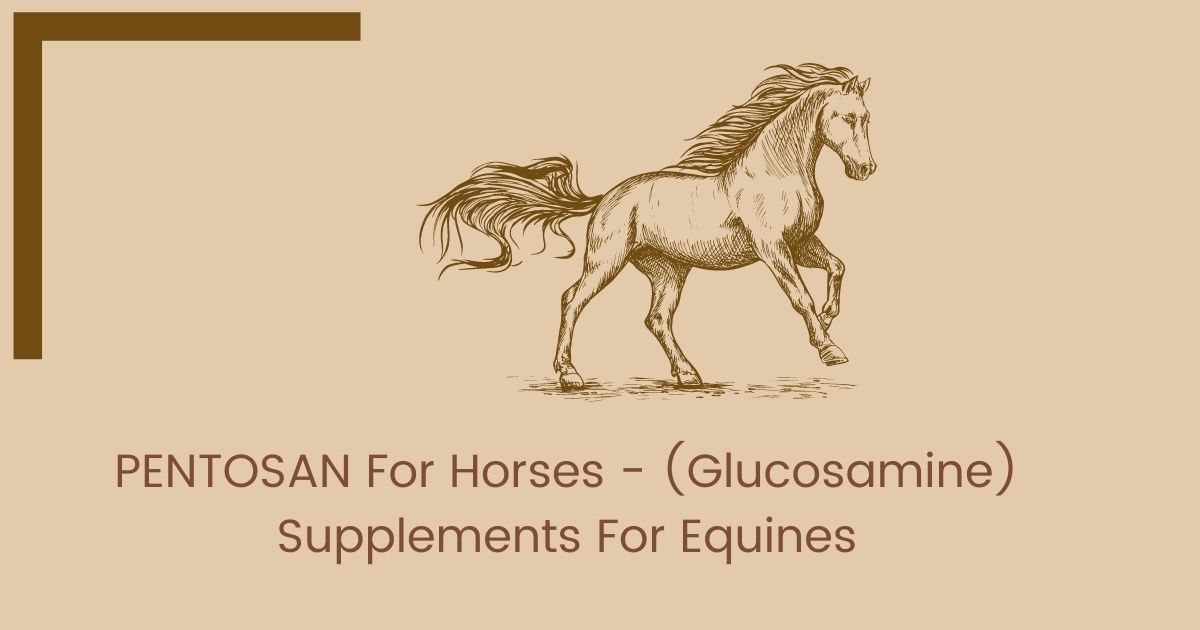 What is Pentosan Polysulfate?

Pentosan polysulphate, also called by its label name: Glucosamine, is a semi-synthetic drug used to alleviate some of the discomfort joint conditions in horses, other animals, and even humans!

Pentosan for horses is beneficial for several conditions, but especially in Europe and Australia, veterinarians use it to alleviate the pain and discomfort of osteoarthritis. Osteoarthritis is, simply put, a degenerative joint disease, meaning it will get worse over time.

That’s where medications like Pentosan come in handy as a way to help handle the effects of osteoarthritis in our large four-legged friends.

Pentosan primarily has an anticoagulant effect (keeps the blood from clotting). But, it also has an anti-inflammatory and fibrinolytic impact that helps protect the joints from further damage.

The Uses of PPS in Horses

Osteoarthritis is one of the most common causes of lameness in horses of all breeds, ages, and sizes. Even with careful management and handling, some will develop it – seemingly out of the blue. Besides lameness, the initial symptoms are unwillingness to walk or gallop, or sometimes what the owners describe as “stiff” legs.

Neither owners nor veterinarians can cure osteoarthritis, unfortunately. But, it can be slowed and alleviated, for example, by using Pentosan. In addition, research and anecdotal evidence suggest that the articular cartilage destruction (fibrillation) can be reduced when administered over long periods, thereby improving clinical symptoms – although the drug didn’t eliminate them.

Nonetheless, in Australia and some parts of Europe, Pentosan equine is systematically used in hoses as part of conservative treatment of osteoarthritis, relieving them of some of the discomfort associated with osteoarthritis.

In the United States, Pentosan for horses can’t be prescribed for osteoarthritis but can be used to clean out joints post-surgery. The lavage or flushing is to prevent and reduce any inflammation that may occur after surgery.

PSGAG vs. Pentosan in Equines

Polysulfated glycosaminoglycan, called PSGAG, is also known by some of the label names, including ‘Adequan.’ These drugs are also an option for horses with degenerative joint diseases.

PSGAGs, like Adequan, are also used to alleviate the pain and lameness that stems from joint diseases and degeneration.

Studies have shown that the PSGAG drug works by inhibiting enzymes within the joint that can cause the degradation of the cartilage and bone and suppress the inflammation present and stimulate the synthesis of new cartilage.

In short, the two drugs work quite similarly within the joint, with PSGAGs being the “older” brother on the market and Pentosan being the new guy. Both help by combating inflammation, preventing further damage, and working to reestablish the joint cartilage.

One isn’t necessarily better than the other, as with all different types of joint supplements, one will have a significant effect on one horse and less so on another, and vice versa. However, some research suggests that there might be an even more significant positive effect when used in conjunction.

One current benefit of PSGAGs, Adequan, is that it is FDA approved for osteoarthritis in horses.

Efficacy of Pentosan Polysulphate in Horses

There’s still relatively little research done on Pentosan for horses and its effect, meaning a lot of anecdotal evidence. But, this doesn’t mean it doesn’t work. Some scientific research has been completed on the efficacy and effects of Pentosan within the joints in horses.

Research suggests that Pentosan equine affects the joint in several ways. Even if it is not a natural painkiller alone – why pain management is often also needed – it does affect the overall health of the joint.

Osteoarthritis can also be described as the loss of proteoglycans due to wear and tear, weakening the joint, causing pain and lameness. Pentosan leads to the replacement of some of these proteoglycans, causing the condition’s progression to slow down.

Studies have revealed that after supplementing horses with Pentosan, they showed increased stride length and joint range of motion, which could be beneficial in alleviating the discomfort of osteoarthritis. But it could also improve performance in horses that often perform a high-intensity sport.

Which is Better? Oral or Injectable Pentosan?

In Europe and Australia, Pentosan for horses is often given as an injection, either in one of the large muscles or intra-articular (directly into the joint). The benefit of this is that it quickly reaches the joint and isn’t lost throughout the metabolism.

The downside to Pentosan injections is that they are often slightly more complicated to administer and should only be done by a veterinarian, especially if it is done intra-articular. Meaning it can be more time-consuming. There is also a slight risk of infection when doing an injection. Lastly, some horses dislike injections, making it difficult to administer the Pentosan.

The benefit of oral joint supplements is the ease of administration, especially that owners can do it themselves at home. The biggest downside to oral supplements containing Pentosan is that the digestive process can diminish the actual amount of the drug that reaches the system and joints.

When given orally, the recommended dose is around 10g of glucosamine powder for a 450-500kg horse.

When given as a Pentosan injection, the dosage can vary from country to country. Still, generally, the usual dosage is one injection(3mg/kg) per week for four weeks—then slowing down to 1 injection once a month.

Are there any Precautions and Drug Interactions to Using Pentosan Polysulfate?

Pentosan for horses and other animals can affect blood clotting abilities. Researchers reported that when the recommended dose of 3mg/kg was administered in horses, the partial prothrombin time (PPT) – a measurement of the blood’s clotting ability – was elevated for up to 24 hours after injection. When the dose was 6 mg/kg, the drug elevated it for 48 hours.

Therefore researchers concluded that Pentosan should not be administered within 24 hours of high-stress activities or similar situations where injuries could occur, as the Pentosan could possibly affect the body’s ability to stop the bleeding.

However, it is essential to note that the anti-blood-clotting effect of Pentosan is relatively mild and doesn’t affect the systemic blood-clotting system. Therefore, if you are worried about the adverse impact of Pentosan on horses, you should discuss it with your veterinarian.

What are the Known Side-Effects of Pentosan for Horses?

As a rule of thumb, Pentosan for horses is generally well tolerated with no known side effects. The most common side effect reported was injection-site reactions, but even this rarely occurs – only around 0.01% of horses experienced an adverse reaction.

Some testimonial evidence suggests that large amounts of Pentosan can lead to elevated serum glucose (blood sugar levels), taking its toll on the body. However, studies recorded that this only occurred in animals given 100 times their recommended dose. It is, therefore, an implausible side effect.

Where to Buy Pentosan

Pentosan sulfate is currently only available at compounding pharmacies in the United States, and injectable Pentosan hasn’t been FDA approved yet. A commercial preparation is available, with a low dose of Pentosan. However, the effectiveness of this can be questionable.

So, even though it is available in some forms without a prescription, you should discuss it with your veterinarian before administering it to your horse.

However, Pentosan injections are approved in the US for post-surgical joint lavage (flushing) to prevent inflammation from being administered by a veterinarian.

Pentosan (often called glucosamine) is often prescribed as part of multimodal treatment in Australia and some parts of Europe. As an injection, it will usually be administered by a veterinarian, and as an oral supplement, it can be bought at a pharmacy.

Overall research and testimonials from owners and professionals indicate that Pentosan for horses is overall good for combating joint inflammation, with noticeable results often seen in two to three weeks – depending on the inflammation, the horse, and extent of the injury. But, results vary, so consult with your veterinarian for the best forward for you and your horse.