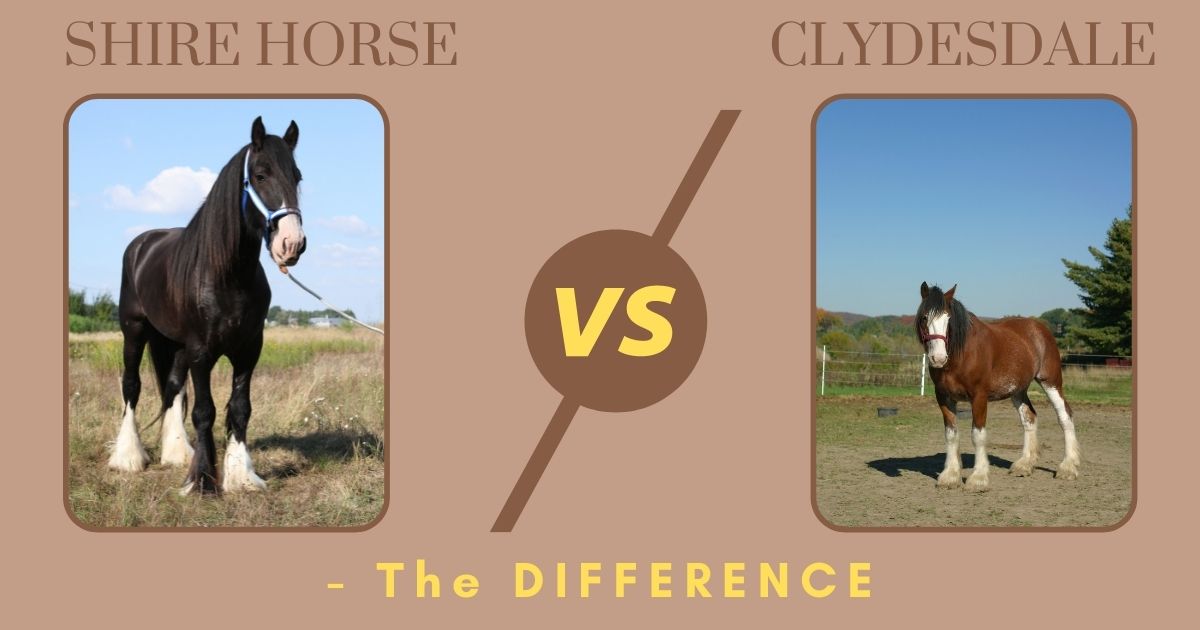 If we asked you to choose whether to own a Shire Horse vs. Clydesdale, what would your choice be? Such a question would be a difficult question to answer because these two horses are both adorable. They are among the most beloved of draft horses.

Despite their immense stature, they are a gentle and charming breed. You can easily mistake a Shire for a Clydesdale because they are similar in every way. What is their difference, therefore? We will explore the differences between these royal equines.

What is a Shire Horse?

The Shire horse dates back to 1066. During the reign of Henry the VII, the soldiers significantly valued the Shire horses for their usefulness in conquest. They stopped using the Shire horses in war after the increased role of gun gunpowder. Medieval writers have recorded these horses as playing a pivotal role in charting the course of history.

In 1853, the first Shire came to the USA, and later in 1880, more large horses arrived. However, in the 1950s and 1960s, the Shire population saw a tremendous decrease due to great slaughtering. At that time, animal feed got highly restricted, which meant that owners could not feed their horses. Therefore, they opted to have them slaughtered.

Owners of Shire horses showed fewer than 100 horses at the annual British Spring show. The public did not like this decline in numbers and demanded authorities to do something.

Breeders became sensitized and worked round the clock to revive this rare breed. Despite all the efforts by the breeders, the Shire Breed is at risk and vulnerable. Can you imagine their population is under 1500 heads worldwide?

The personality of the Shire horse is quite intriguing. They are submissive and teachable. No wonder it is described as a gentle giant. Their desire to learn new things makes them a pleasant breed to have. They are at their best when working because of their work ethic.

Their immense stature can be pretty intimidating and overpowering to any human. However, their benign personality makes it easy to train them, making them an ideal pick for beginners and seasoned owners.

If you come across a massive equine with enormous structure and feathered hair on the legs, no doubt it’s a Shire horse. Their form is coarse and thick, as opposed to other draft horses. Their physique makes it possible to perform tasking labor and pull heavy weights.

Shire horses are capable of performing various tasks. You can count on them to deliver. You will not be disappointed if you need them to pull carts, do farm work, pull a wagon, or work in the field.

Nowadays, they are not suitable to do challenging tasks. They are more ceremonial and aesthetically appealing.

Shire horses are mostly healthy, except when they aren’t. The primary health challenge they are prone to is a neuromuscular disease called polysaccharide storage myopathy. This disease causes the hind legs to have muscle spasms. You can avert this problem by feeding your Shire horse a high-fat diet.

Shire horses have feathered legs which will need you to care for them to keep pests and debris away diligently. Keeping them clean helps to avoid unnecessary health concerns.

Their life span is significantly shorter than the other equines; they live for slightly more than 20 years.

Shire horses will fit pretty well in any homestead. They will make for a priceless asset in your farm if you require your farm plowed and some heavy things moved. Other than that, you can use them for training your young ones riding because of their calm demeanor.

Be careful to have a trainer supervise to avoid unprecedented eventualities. Make sure the rider feels at ease and comfortable.

What is a Clydesdale Horse?

The name of Clydesdale horse originated from the place of its origin, which is Clydesdale or valley of the River Clyde in Lanarkshire county.

Two theories describe their origin. One says that Flemish Stallions from Scotland mated with local mares, resulting in bigger foals than the local stock. The other theory states that they promulgated the Flemish horses that importers brought in the 15th century in the 18th century.

By 1840 the Clydesdale population had grown due to extensive crossbreeding with local mares. Large numbers began to come in from Scotland to the neighboring regions. They came in very handy in the First World War, as soldiers used them in their thousands during the war. However, after that, their numbers began to decrease steadily.

With the mechanization of farm activities, their usefulness decreased. By the Second World War, the numbers of Clydesdale breeding stallions had further dropped.

The Commonwealth Clydesdale Horse Society began to breed Clydesdale to revive this breed between 1906 and 1936 in Australia extensively. Its popularity increased not only in Australia but also in New Zealand.

Like the Shire, researchers regard it as rare, and they are taking all steps to protect this breed. In America, Clydesdale became known for its association with Budweiser Association as their mascot in 1933.

If you meet a Clydesdale, you will be impressed by its quiet, controlled energy. They are easy-going but ready for any task and eager to learn.

They are also cool, calm, and collected, hence cool-blooded. The term “cool-blooded” stems from calm, cool, and collected horses. They can work with folks of all ages due to their personality.

They are enormous but slightly smaller than their draft cousins. These muscular equines have a body built that is more compact than other drafts.

They are classical of bay color but can be black, gray, or chestnut colors. You will notice white markings on the face and legs, sometimes on the belly portion.

Clydesdales have performed many duties and tasks given to them from time immemorial. They used them to haul and help agricultural production in the early days. They used them for logging and driving. Currently, you will find these equines pulling carriages and marching in parades to show off their beauty.

Clydesdales have well-built and robust muscles but can be prone to health issues. They can carry genetic health problems. They are prone to chronic progressive lymphedema that makes their limbs swell.

They also suffer Clyde’s itch, a skin condition that causes itching. This disease happens in their feathery limps. Keep the area around the legs and hooves clean as often as possible.

Clydesdales are at their best when they are performing tasks. You can keep them for companionship or their muscle power. They are docile and gentle, which will make you comfortable with their colossal size.

They are Both Draft Breeds

They are both bred and adapted to drawing heavy loads. Their large and strong muscular body makes them suitable to do heavy tasks.

Both have Feathered Legs

This characteristic feature sets them apart from other horses. Their legs have feathered hair that you will need to clean frequently.

These equines have a muscular, strong, large, well-built body structure. A glance at them gives the impression of massive strength, making them appealing to any buyer.

These muscle machines have an incredible work ethic. They were both used to doing heavy farm work of pulling plows and heavy artillery in a war in the early days. Even though they don’t do arduous tasks nowadays, you will find them gracefully pulling carriages or saddled up for a ride.

Kind Disposition and Used for Pleasure

They both have a calm, docile and gentle demeanor. Trainers of horses always have an easy time teaching them because they both are willing to learn new things. They are both sweet-natured and respond kindly to affectionate touch.

A Clydesdale has a slightly convex profile, also known as a “Roman” nose. In contrast, the Shire has a more concave profile.

White Shire are rare, while available ones are not desirable because of the large white patches. Chestnut color is also not appealing to horse lovers. While the white color markings on the Clydesdale is distinctive and spread all over its body, with white hair spread through the coat

Shires, the biggest horse breed in the world, originated from England, while Clydesdale is a native of Scotland.

A Clydesdale body is robust and barrel-chested. Its body is smaller than the Shire, but it’s more refined. Their hindquarters and shoulders are incredibly muscular, and their torsos are compact instead of Shires.

Between Shires and Clydesdale, Shires have a heavier average weight and are broader. Shires weigh 2000 lb (907 kg), while Clydesdale weighs 1800 lb (816 kg).

Shires come in different colors, including bay, black, gray, brown, and chestnut (on rare occasions). On the other hand, Clydesdales comes in black, roan, and brown colors.

The Height and Weight of a Clydesdale Horse Compared to Human

A Clydesdale’s height gets measured from the ground to the tip of its shoulders (withers) in units called hands.

A Clydesdale, compared to a human, is heavier and taller. It might not be very comforting if you stand side to side with a Clydesdale due to its massive size. However, you can take comfort in its tender character that you will be safe.

Putting a Clydesdale Next to a Regular Horse

If you place a Clydesdale next to a regular horse, the former is most definitely heavier. An average horse’s weight ranges between 900 lb to 1,200 lb (408 to 544 kg), which is half the weight of a Clydesdale.

Regular horses are mostly warm-blooded or hot-blooded. Whereas a draft horse, like the Clydesdale, is cold-blooded. This blood type essentially refers to its temperament. Meaning Clydesdale will make better human companions than regular horses due to their calm nature, which is not easily upset, eagerness to learn, and ability to grasp.

A Clydesdale is a good horse for horse trainers because it is less likely to overreact to stimuli, which is much different to hot blood horses, like the Arabian and Thoroughbred, who have lots of energy and spirit.

Regular horses are strong but not as much as the Clydesdales. You will not find them pulling plows in armor-heavy machines. On the other hand, Clydesdale possesses the raw power and stamina to carry on heavy tasks.

A regular horse has smooth legs but may grow longer hair on its lower legs. A draft horse, on the other hand, like the Clydesdale, has feathering hair on its legs.

We believe this article provides you with enough information to tell the Shire and Clydesdale apart and know which one to choose. If you forget a thing or two, keep in mind that the Shire is larger and taller than the Clydesdale. Both Shires and Clydesdales are a wonder to behold, a true expression that we cannot fully exhaust the beauty of nature.

It is, however, disappointing that both of these breeds have a declining population. We should take care of them so that future generations can marvel at these wonders.