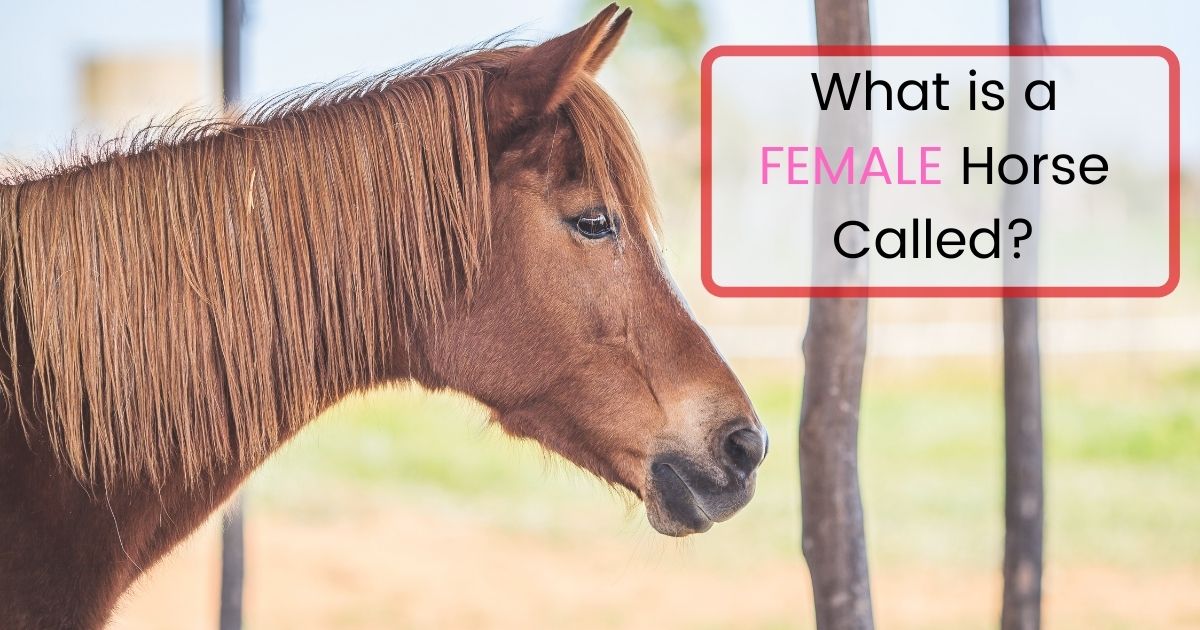 You can learn much about female horses, including what is a female baby horse called. Notably, the age of a horse determines its performance and vulnerability to injuries and diseases. For this reason, you should know the titles of horse genders to identify their ages. So, what do you need to know about female horses?

What is a Female Horse Called?

Using a proper title for your female horse reminds you about its age. Such memory tells you what to do when caring for and training your horse.

How to Identify a Female Horse

What do you look for to identify a female horse? Regardless of whether it is a filly horse or mare horse, some specific characteristics distinguish it from male horses.

The simplest method of identifying a female horse is to look at its underside. If you see an udder, the horse is a mare. However, some female horses do not have a prominent udder. So, you should lift the tail to identify whether it has an anus and a vulva. Male horses only have an anus.

You can get confused about whether a female horse is a young female horse (filly) or a mature one (mare). To tell the difference, you should check the horse’s teeth.

Notably, horses develop a complete set of teeth (24 molars and 12 incisors) when they are five years old. So, if a young female horse does not have some teeth, it is a filly. A female horse with a total of 36 teeth is a mare.

What do You Call a Spayed Female Horse?

Even though spaying is uncommon, any female horse that has undergone the procedure stands as a mare. Better still, you can call it a spayed mare.

How much do you know about spaying? The process entails the removal of the female reproductive organs from a horse. Some mare owners spay their mares to control their heat-related behaviors. Some mares kick, flinch or bolt during a ride when on heat. Others distract stallions that are within sight.

Before you spay your horse, you should know that the process is irreversible. Also, the process is expensive, and it can cause hemorrhage and colic to your horse, among other consequences. Notably, you can choose to understand your horse when on heat instead of spaying it.

What is the Difference between a Filly and a Foal?

To juggle your mind, what is a female baby horse called? What is a filly? What is a colt? The answer to the questions provides the difference between a filly and a foal.

Notably, all baby horses are foals. So, the word foal refers to both a young female horse and a young male horse. However, you can call a baby female horse a filly foal or a filly.

What is a mature female horse called? When answering this question, it is highly possible to confuse a broodmare and a dam. However, know that a broodmare is a female thoroughbred horse while a dam is a mother to any horse.

So, the title broodmare is independent while the title dam is dependent. So, you can point to a female horse and call it a broodmare. However, you have to involve two horses when mentioning the title dam. In other words, you should address a mother horse and her colt or filly.

General Facts for Both Female and Male Horses

Where Does the Word Filly Come From?

The word filly comes from the 1500s word Old Norse of “Fylja,” meaning to follow. During the Middle English period, the word evolved to become filli, which means the same as the old English word “foal.”

So, people used the word filli to refer to a foal that keeps on following its mother. Filli also has an Australian and French origin with a meaning similar to that of an Old Norse. In English, the word filly is a slang word that refers to a girl.

Last, did you know that Australians have a champion fillies’ day? During the day, people get entertainment and food. They also wear fashionable clothes and participate in races.

Female horses are exceptional beings. Their characteristics make them stand out from their male counterparts. Importantly, knowing the titles of your female horses enables you to take good care of them. In addition, such knowledge tells you about the performance of your female horse and whether it requires special attention.

You can now identify a female horse and use its titles like a pro using the discussed information. Never again will you remain quiet when a hot discussion about female horses is up.