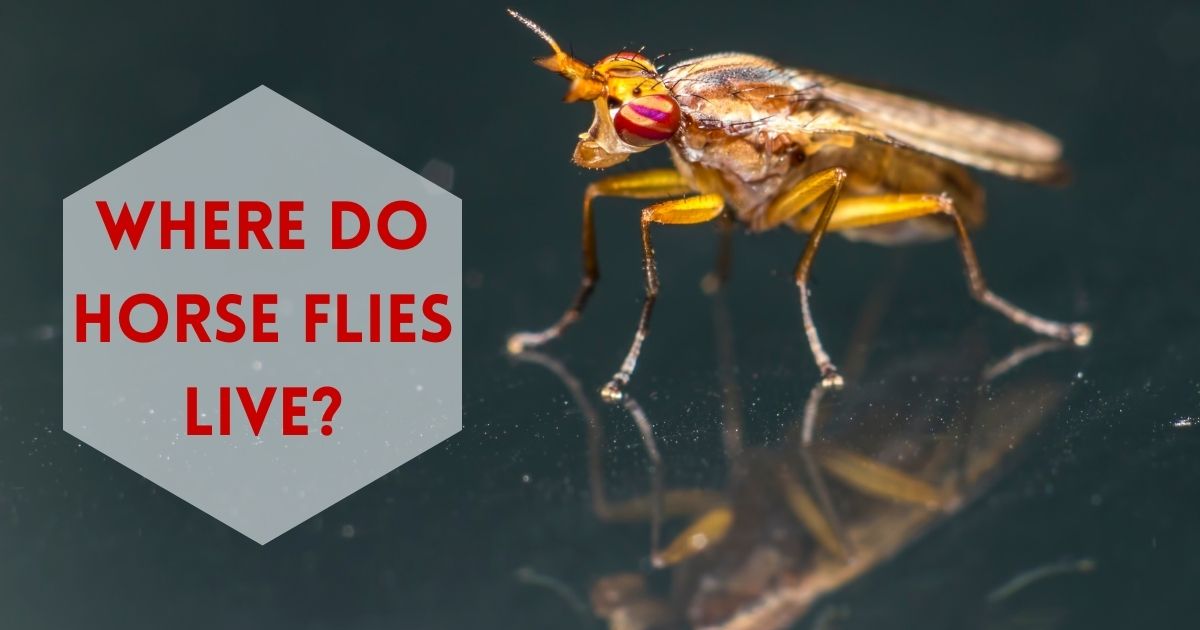 We will explore all these questions and more. But, first, let’s look at the horsefly’s features.

The Features of the Horse Fly

A horsefly is a giant insect with solid and sharp mouthparts accompanied by piercing and sucking digestive organs. They have hair all over their bodies to help them retain water while flying in hot, dry conditions where other insects cannot survive.

Their hind legs are long and slender, which allows them to rest on vegetation that will enable them to fly away quickly. Their eyes are large, and their compound eyes that point in different directions help them view everything around them while flying.

A horsefly’s wings are large, with many veins. They have six legs, and the females have sharp, stabbing mouthparts. Their legs are long and specialized in hanging on vegetation while waiting for their victims with their front legs.

Where do Horse Flies Live?

Horseflies thrive in wet places and hot weather. You will frequently spot them on pasturelands beside streams during the summer. They like weedy areas and long grass that may trap moisture and replicate the humid pasture environment they enjoy so much.

What is the Difference Between a Horse Fly and a Deer Fly?

Although these insects are dipterans that prey on other animals for their nutrient-rich blood, they do not look alike. Here are several ways to tell them apart:

Horseflies are much bigger than deer flies, at around 20mm (2cm) long. They are also much fatter in the abdomen. Deer flies are more petite (about 15mm equivalent to 1.5cm) and more slender.

Horsefly mouthparts include a long, saw-like apparatus used to slice open skin for access to blood. Deer fly’s mouthparts appear short and stout because theirs is designed to pierce skin instead of cutting it.

A deer fly has a much longer and more slender antenna than a horsefly. A horsefly’s antennae may be slightly thinner, but not by much.

Horseflies are blood-feeding insects, but they do not just feed on any animals. Instead, they prefer mammals and birds over reptiles and amphibians because their body heat helps the horsefly to reproduce faster.

Female horseflies need to feed on blood before they can lay their eggs. Male horseflies do not suck blood. They can survive using other food sources like nectar and sap.

How do Horse Flies Identify Their Next “Victim”?

Horseflies can sense the carbon dioxide given off by animals from a distance of up to 100m (109 yards). They can also detect moist, warm areas that animals that give off more of this gas often inhabit.

Once a horsefly identifies an area where a possible victim is hiding, it will hover around and check for more signs. Then, they use their sense of smell to determine which direction the animal is in, so they can come at it from below.

Horseflies also use visual cues to tell which animals are easier to attack. For example, a slower-moving animal with dark skin would make a good target. They may follow a moving animal for a short while before choosing their prey, waiting until the animal slows down or stops.

Horseflies are not picky about where they bite their victims, so they will likely attack any area the animal has exposed skin. Their bites are painful and itchy, so most animals will try to smack them away or flee from the site. However, if an animal is slow-moving or injured, it may be hard for them to escape.

Female horse flies are most likely to bite humans on the arms, hands, legs, and ankles since these parts of the body are easier targets. They often drink until their stomachs are full before taking off, but they will happily return to drain more blood if given a chance.

Like other biting insects, horsefly bites can cause infection and disease. They may also irritate the skin and introduce foreign substances to an open wound.

Once a horsefly bites, it injects anticoagulant compounds into its hosts, causing allergic reactions. This leads to:

If you think a horsefly has bitten you and the bite becomes infected or severe, visit a doctor. Doctors will prescribe antibiotics to treat the infection and antihistamines to relieve itching.

If the bite is not infected and you can tolerate the symptoms, many home remedies reduce the discomfort until it wears off. Some of these remedies include:

The Life Cycle and Reproduction of the Horse Fly

Horseflies require warm temperatures and standing water to reproduce. Their eggs will not hatch if the water is too cold or if there is not enough food for them to eat after they hatch.

A female horsefly usually lays between 100 and 300 eggs near standing water, such as lakes or ponds. These bodies of water must be near places where animals (including humans) frequent, as the horseflies prey on them for food.

The eggs hatch within a few days and develop into larvae over several weeks. They live in standing water until they become pupae, which can take anywhere from two weeks up to three months, depending on conditions.

Once the larvae are ready, they crawl to land and look for a dry, sheltered place to pupate. The area must be protected from rain and wind so that when they change into adults, their new exoskeletons do not become damaged.

Adult horsefly lifespan is about two months, but they can lay up to several thousand eggs during this time.

Horseflies are most active during the late summer and early fall. However, most horsefly bites happen between June and September, so it is essential to know how to avoid them during this time.

It is nearly impossible to avoid contact with horse flies altogether since they are attracted to any area where mammals congregate. However, if you know what attracts horse flies and how to avoid them, you can reduce your chances of getting bitten:

Here are a few interesting facts about horseflies:

How to Get Rid of Horse Flies

There are several ways to get rid of horseflies around your home or in the wild:

Horseflies lay eggs in moist soil and rotting organic matter, such as compost piles or old leaves. Therefore, the horsefly population will be significantly reduced if you remove these breeding grounds.

You can also line the banks of ponds, streams, and ditches with sandbags to prevent eggs from hatching. These young flies will not survive in such a dry environment.

Horseflies are attracted to standing water because that is where their larvae live. Therefore, remove all standing water from your property and apply a layer of oil over the area. The oil will suffocate any larvae residing underneath.

Use a Fly Swatter

Horseflies are giant insects that are slower than the average fly. They do not usually fly away when approached by humans, so you can easily swat them with a fly swatter.

Get Rid of Garbage

Horseflies are attracted to garbage because of the food scraps found in it. Keep trash covered at all times or take it inside when not in use.

If you have outdoor gatherings or a backyard barbecue, consider lighting citronella candles or torches. The smoke released by these products will repel horseflies.

Horseflies live all over the world. They can be found in tropical, subtropical, and temperate zones. In North America, they are most prevalent from August to November but have been sighted as early as June or as late as December.

In South Africa, they are commonly known as dew flies, and in Australia and New Zealand, they are called clegs. The key takeaway should be that wherever you go, horse flies will not only follow you but also likely bother you with their bites.

Did you find this information helpful? Do you have any further questions? Have anything to add? Leave a comment below, and remember to share and follow!