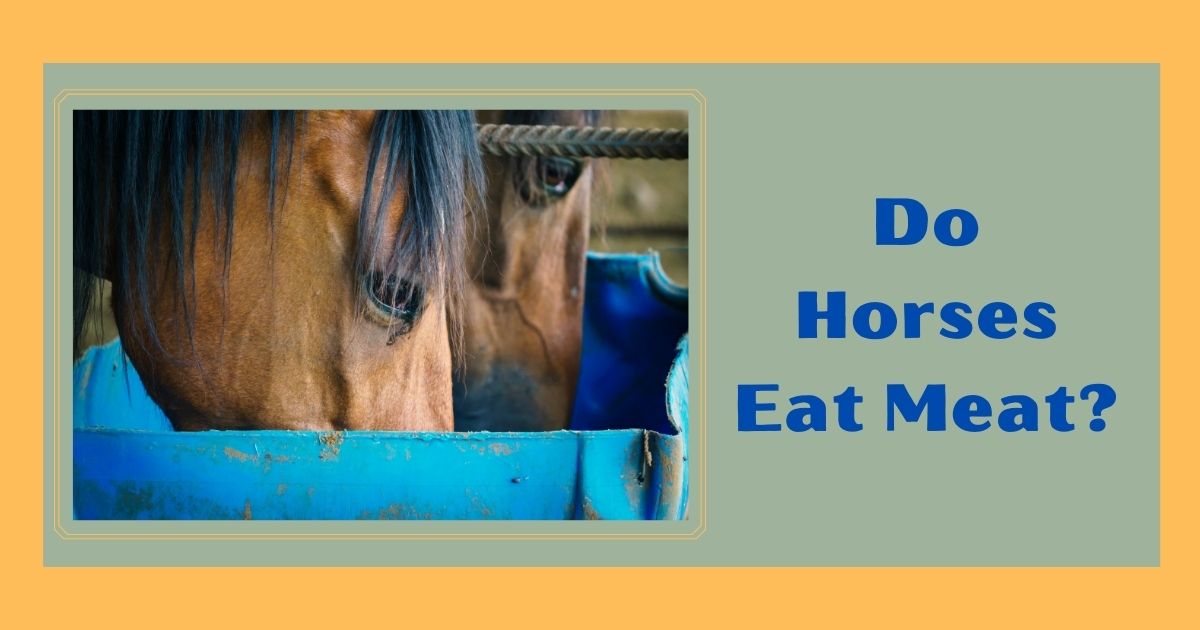 Are you wondering, “do horses eat meat?”.

Horses are a popular pet that many people enjoy, but can a horse eat meat? This is a question that many people have asked over the years. There are many different opinions on this topic, and it’s important to know what your options are before making a decision.

If you want to know more about this question, please keep reading!

Horses are herbivores. This means that their body is designed to eat plants and vegetation, which they obtain from grasses in the wild. Horses break down this forage in their stomach when it passes into the intestine.

First of all, we need to answer the question: are horses herbivores? A herbivore is an animal that only eats vegetation and plant life. This is different from carnivores, which are animals that only eat meat or other carnivores to survive.

So by definition, horses are herbivores. As a basic rule, herbivores eat only vegetation and plant life. This would seem to be an easy answer for the question “Do horses eat meat?” but there is more to it than that.

This is a little bit more complicated because there are some instances where horses have been found to eat meat. However, as a general rule, it would be safe to say that horses should not be eating meat.

What Is an Opportunistic Carnivore?

An opportunistic carnivore is an animal that will consume others if the situation arises, but they don’t require food to survive. It turns out that animals commonly labeled as “strict herbivores” may not be so rigid in reality. Most herbivores will eat insects and other small animals if the opportunity arises. This is not a large part of their diet, but they can and do consume meat in certain situations.

It’s been theorized that some hooved animals, like cows and deer, eat bones or antlers to compensate for the lack of calcium in their diet. However, it appears that the rare herbivore discovers, by accident, that they can consume animals.

Pica, which is when animals (including humans!) eat unusual things that are often lacking in nutrition, may be used to explain away this conduct.

Horses can eat sand, wood, manes/tails, and dung for various reasons. For example, horses may be bored or malnourished at times. Horses may just be curious, though, and try different foods to see if they are edible.

The Book About Meat-Eating Horses

So, will horses eat meat?

Some horses will eat meat, though it is not the ideal food for them. The book about “meat-eating horses” describes how horrible their lives are because most of them live on factory farms where they are malnourished and abused.

These unfortunate animals may eat meat (and even decaying flesh) to survive. It’s not a good existence for horses, though. Many of them do not live long lives.

The book about “meat-eating horses” is an interesting perspective on the life of one such horse. This animal was severely injured and left to die by his owners on a farm. However, he survived and had to do whatever it took to stay alive.

This book looks at how one horse managed to do what he needed to survive, even when things got horrible.

The equine digestive system is quite different from that of a carnivore. Horses are not equipped to handle a diet rich in protein and fat, as are other animals such as cats. Instead, they are designed to eat forage- grasses and grains high in carbohydrate content.

To put it simply: horses are herbivores. That means they are designed to eat and process vegetation. There are some instances where horses have been found to eat meat. However, it is not the ideal food for them. The majority of herbivores are actually able to eat insects and other small animals if the situation arises.

Horses aren’t equipped to handle meat in the same way humans are. They have flat teeth for munching on vegetation. Carnivores, on the other hand, have pointed ones for tearing flesh. The equine digestive system is long instead of a carnivore’s short length to speed up food transit. A horse’s liver isn’t equipped to break down meat in the way that a carnivore is.

Digestion Starts With the Teeth

There are twelve sets of incisors in a horse’s mouth, which are used for cutting off vegetation so the molars can chew it. Horses are herbivores with flat teeth suited to grinding vegetation down instead of ripping flesh apart.

Horses are herbivores that eat forage (high in carbohydrates and low in protein and fat) instead of meat. The equine digestive system is long, instead of a carnivore’s short length, allowing food to pass through more quickly.

To digest their food, they need to break it down into smaller parts that are more easily absorbed through the intestinal walls. This is why they are called “foregut fermenters,”  it simply means that their digestive system starts at the mouth and goes all the way down to the intestines.

A horse’s stomach is small to hold just enough food for it to graze for an extended time. Therefore, horses are designed to eat slowly rather than gulp down several pounds at once.

So, are horses omnivores?

Horses are herbivores designed to live off of forage (high in carbohydrates and low in protein and fat) rather than meat. Therefore, they are not equipped to handle meat’s high protein and fat content like other animals such as cats.

The equine digestive system is long, whereas a carnivore is short. Digestion starts with the teeth, as horses are equipped with flat teeth to grind vegetation instead of sharp ones to tear flesh apart.

5 Reasons Why Horses Will Eat Meat

In Europe and the United States, horse owners sometimes add beef gelatin and bone meal to horse feed. These are frequent supplements that help horses acquire essential proteins and fats by adding them to their diet as additives.

Horses can also be afflicted with pica, a mineral deficiency, and will chew on anything from bones to antlers or cartilage in an attempt to make up for the nutrients they are missing.

Horses were utilized in arctic and alpine regions to pull heavy sleds, often over great distances. The sleds were filled with equipment, coal, and sometimes food for those living up there.

Horses were adapted to handle harsh weather conditions like snow and ice. Unlike humans, their hair grew longer and thicker during the winter, and they had an immense amount of blood for oxygen-bearing capacity.

They were well equipped for the cooler climates as long as they were given appropriate food. The horses ate various plants, including vegetables that grew during the harsh winter, twigs, and beef.

It is said that the Siberian horses turned white after one winter in this climate because of their increased number of blood vessels. However, meat was a nutrient-dense food source, and it helped to give them the energy they needed to survive this harsh climate.

The meat the horses ate typically consisted of other animals who also lived up there, such as reindeer and oxen. The meat was cut into thin strips and dried for a few hours by the fire. Horses might also eat meat in the form of a broth made from boiling it in water.

Horses have been known to consume meat during war or other distressing events in history. During periods of war, horses were compelled to eat flesh, including human flesh, to survive.

People like the Bedouin (famous for Arabian horses) fed their horses a mixture of honey, dried locusts, and dried camel meat in desert places where flora was limited, and warfare was common, according to Rosalind Dalefield.

The Bedouin fed dates, dried camel meat, and other goodies to their horses to fatten them up for combat.

Dried fish, cheeseburgers, and other meat-based foods may not be appealing to a horse due to their high sodium content.

Because a horse appreciates a nice salt lick– and its body requires those minerals– the appeal of Icelandic dried fish, while delivering protein benefits, was probably more in the salty snack vein for the horses.

Horses are one of the few animals that will ingest meat without other types of food sources. They might eat meat because it’s salty, which can help their thirst drive.

Horses might eat meat if they come across it accidentally. For example, this can happen if an owner is grilling and the horse gets too close and eats a chunk or two of the meat, which they might mistake for a nice, crunchy snack.

This is not because they had a food craving or anything. Instead, it’s because they saw you eating it and wanted to steal a taste! Meat is not a normal part of their diet, but they want to join in the fun.

Horses are curious animals and will put anything into their mouths to figure it out. Of course, it could be because they are smelling something else on the meat that has caught their attention, so they go in for a nibble.

Most horses are herbivores, but some do eat meat. When they graze on pasture land, the grasses and other plants in their diet provide them with all the amino acids needed to produce protein without dietary supplementation or animal proteins.

Horses can also be fed grain-based feeds for various reasons, including convenience (especially if hay isn’t available), disease prevention, allergies, etc., which may include animals like cows and chicken as ingredients.

Because horses’ digestive systems digest foods more slowly than humans’, it is essential to feed your horse appropriately; otherwise, he might end up eating too quickly and gorging himself – leading to colic or even death!

So while most horses only need vegetables for a healthy diet, some are specifically bred to be meat-eaters. However, there are certain circumstances in which your horse may require additional protein. You might do them a favor by having some meat around to feed them in those cases.

The horse eats meat to survive in harsh environments where they do not have access to vegetation or other protein sources. In addition, they may eat meat if it is easily accessible and salty- as a snack.